YO PRETEND THAT I HAVE BEEN ROUTINELY REVIEWING ALBUMS.  ACTUALLY DON'T, AND RECOGNIZE THAT THAT MEANS I LIKE THIS ONE.


Nah, this isn't about Future hahaha...I'm not on that wave.  I DO, however, routinely listen to young/new rappers.  I'm always impressed by the level of talent of some of these younger rappers, and it's great to know that rap isn't necessarily in bad hands.  I get put on by random people (the homie Big Ghostfase put me on to Kembe X for example) or random people just find me.  This guy falls in the latter category.  Big Bad Baragon is a rapper/producer from Newburgh, NY.  You might know him from his appearance on BET's Freestyle Friday last year, but if you're like me and don't watch BET...you didn't.  After checking out some of his shit and talking to dude though, I decided to give his new project a listen. 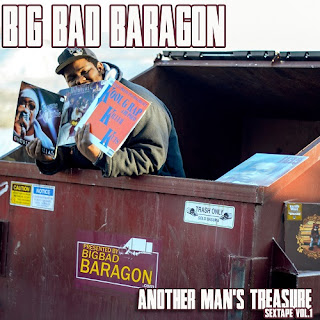 Just from the cover, you can tell the guy has some hip-hop pedigree. Those are some CLASSICS.  I'm already fucking hyped!


2. Papi Balboa - Yooooooooo the Godfrey-sounding nigga had me rolling!  Baragon uses a couple of flows on this one, and the wordplay is nice.  I fucks with it!  He takes jabs at himself regarding the Freestyle Friday loss, and the nerd shout-out via the DBZ reference is greatly appreciated.  If the rest of the tape is like this, I'm going to be bumping this for quite a while.  - 4.5/5


4. I Wanna Be a Rapper - Some old-school sounding production here...kinda puts me in the mind of some DOOM shit to be honest.  This one's got some social commentary...kinda surprising to hear from someone so young, but he's quite polished with it.  The hook is kinda meh, but overall, I fucks with it - 3.5/5


5. Angie - This kinda sounds like something you'd hear Yasiin Bey (Mos Def) rap to.  I fuck with the backpack vibe, and it's fucking rare to find a young/new rapper who can do romantic tracks.  Baragon shows off his flexibility here; he's already done a typical rapper shit track, a socially conscious rapper, and a love track, and that's just the first 3 rap tracks.  He keeps it short and to the point..."Angie, will you marry me?" - 4/5


6. Romeo and Juliet - As you can tell from the title, another romantic track...you probably recognize the snare (and if you don't....ugh).  This really sounds like something you'd hear on an album rather than a mixtape...I've liked the production thus far, but this one really sounds a slight cut above the rest in terms of quality.  I like this one, even if I wanted to hear...nvm.  - 3.5/5


8. So Good - This sounds a little like something you'd hear Ghostface use.  Going to be honest, I didn't look at the complete title of the mixtape, so I was surprised to hear another love track...for the most part, I think that that's a bad look (look at Game's R.E.D. Album or Wale's Ambition to see examples of this done poorly).  Putting it in the middle though, and splitting it up with interludes makes it so you don't get love overload, and you can appreciate each track.  Still a little too much romance for a cynic like me, but this bumps. - 3.5/5


9. Deep Cover (845-Mix) - BRUH.  Alright, this shit right here, nigga?!  This is why I listen to rap, man. Baragon does this track justice with some slick words here - "Think of the penalties and all the men'll be dead or in penitentiaries by that you're 23!" Dog.  Man, I love this one. I was sitting at work getting mad work done with this on repeat without even realizing I was being so damn productive.  - 5/5


10. Pink Matter Interlude (Ft. Dreadful Controversy) - Hahaha, he really started this track with a "no homo." Terrible. I forgot how dope the instrumental to "Pink Matter" was though.  I'm glad this didn't turn into another ode though, haha...this shit is funny as hell though.


11. 8:45 in Newburgh (Ft. Don Phenom as Fee Diddy) - No one can say that Baragon disgraces the instrumentals he selects. This shit is fire!  I'm not sure who exactly he's railing at here, but yo..."What kinda lyricist is worried about appearances?  Well it's clear these niggas here cuz they was weird in the gutter with brothers who suffer from mothers who handed them everything that they wanted cuz their daddies done abandoned them!  Now they wear girls' pants, I understand; when their father left the fam, he took the chance to be a man from them!"  YO. - 5/5


12. Call from Vicki - I'm kinda mad this beat wasn't used for a rap...but this interlude is also entertaining


14. B.O.N.G. (Ft. Jean Paul Viteri) - Yooooo Jean Paul tried to eat Baragon on this one, I wouldn't be pleased hahaha.  That aside, another great beat selection!  I haven't listened to O.P.P. in a minute.  The FUNNY shit is raps about bagging other niggas' girls, but then basically his entire crew doesn't do it, hahahaha...btw this is clever as fuck - "I eat if she's bad...I call it junk food" - 4.5/5


15. Outro (Ft. Jacob Kondrath) - Basically an outro, but there are a couple more tracks


16. Hustle (Ft. NaCir Jahmill) - Another one with some social commentary, you've probably heard something similar to this, but again, the production is pretty damn good.  Not gonna lie though, Ace Hood basically killed the phrase "Hustle Hard" so I don't care to hear that ever again - 3/5


17. Gotta Win (Ft. Kool G. Rap) - The surprise of the tape!  Kool G Rap!  Baragon holds his own with a fucking legend in Kool G, which is amazing in and of itself.  Going further, by the end of this track, you don't think of this as a Kool G. Rap track...which the vast majority of younger rappers definitely couldn't do.  Nice little extended phone line at the end as well.  Nice way to end the tape. - 4/5

Overall, I really like this tape...I've been listening to it on repeat since I received it, and I find something new every time I listen to it.  It's always nice to hear good new rappers, and I'm slightly encouraged by the fact that: A. He's from New York, and B. He's already able to get Kool G. on a track.  I'm looking forward to another (less romance-focused) tape.  Lots of entertainment value, lots of replay value, some good production, and plenty of BARS.